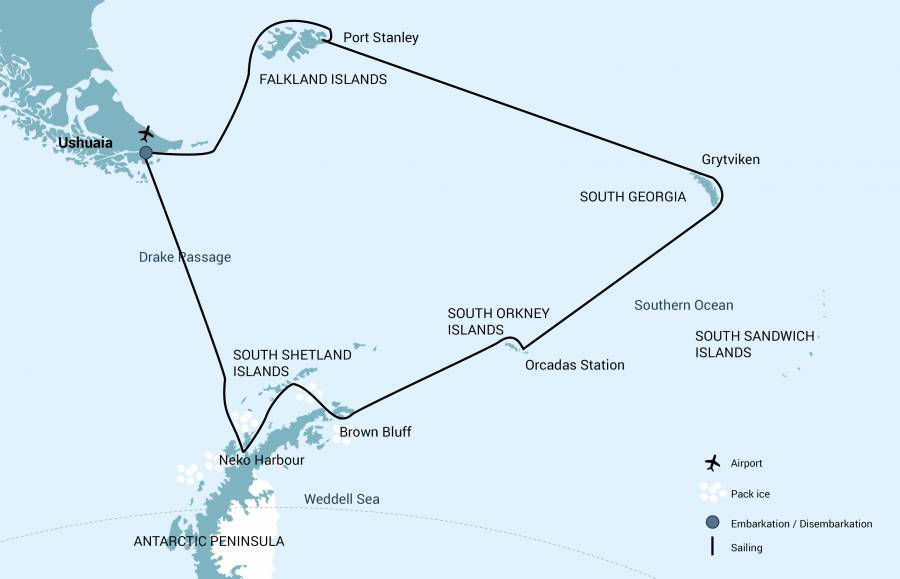 All (sub-)Antarctic highlights in one voyage, with spectacular landing sites on the Falkland Islands and encounters with black-browed albatrosses and rockhopper pinguins. This voyage includes also four days on South Georgia, probably the most beautiful place on earth. Be prepared for ten thousands of king penguins and their chicks, sea lions on the beaches, elephant seals, wandering albatrosses and Gentoo penguins and great historical sites including the trails of British Polar explorer Ernest Shackleton. We plan a visit to Orcadas station on South Orkney Islands and If the ice permits we will sail into the Weddell Sea through the ice-clogged Antarctic Sound. Huge tabular icebergs will announce our arrival to the eastern side of the Antarctic Peninsula.

Day 1: In the afternoon we embark our vessel m/v Ortelius in Ushuaia – In the afternoon, we embark in Ushuaia, Tierra del Fuego, Argentina, the southernmost city in the world located at the Beagle Channel and sail through this scenic waterway for the rest of the evening.

Days 2: At sea, en-route to the Falkland Islands (Islas Malvinas) – At Sea, the ship is followed by several species of albatrosses, storm petrels, shearwaters and diving petrels.

Day 4: Port Stanley, Falkland Islands (Islas Malvinas). Here we can see quite a number of stranded clippers from a century ago – In Stanley, the capital of the Falklands, we can experience Falkland culture, which has some South American characteristics as well as Victorian charm. In Stanley and the surrounding area we can see quite an important number of stranded clippers from a century ago. All passengers are free to wander around on their own. We recommend a visit to the local church and museum (admission fees not included).

Salisbury Plain, St Andrews Bay and Gold Harbour do not only house the three largest King penguin colonies in South Georgia but are also three of the largest breeding beaches for Southern Elephant seals in the world. Only at this time of the year they peak in their breeding cycle. Watch the incredible spectacle of large 4 ton bull’s keep a constant vigil and occasionally fight over territories of dozens of females who have just given birth or are just about to deliver. The beaches are packed with Elephant seals!

At Fortuna Bay, we might try to follow in the footsteps of the great British Explorer Ernest Shackleton and hike over to Stromness Bay. There and at Grytviken we’ll see an abandoned whaling village, where King Penguins now walk in the streets and seals have taken over the buildings. At Grytviken we’ll also offer a visit to the Whaling History Museum as well as to Shackleton´s grave nearby. We will depart from South Georgia in the afternoon of day 11.

We may visit Cierva Cove were we find ourselves in a world of icebergs well suited for an exploratory Zodiac cruise in search of fantastic photo opportunities. Crabeater seals and Leopard seals are often seen here and a small rookery of Chinstraps are found on a small island in the bay. The landscape is typical Antarctica with huge glaciated mountains all around. Mikkelson Harbour on the southern side of Trinity Island was discovered by the Swedish Antarctic Expedition of 1901-04. Gentoo penguins nest on the island and Weddell seals often haul out on shore. We also find remains of the early 20th Century Whaling period and an Argentinean refuge hut.

In Deception Island our ship braves into the entrance of the crater through the spectacular Neptune’s Bellow into the ring of Deception Island. Deception itself is a sub-ducted crater, which opens into the sea, creating a natural harbour for the ship. Here we find hot springs, an abandoned whaling station, thousands of Cape Petrels and many Kelp Gulls, Brown and South Polar Skuas and Antarctic Terns. Wilson’s Storm Petrels and Black-bellied Storm Petrels nest in the ruins of the whaling station in Whalers Bay. We leave from here and sail through the Shetland Islands attempting to land at Half Moon Island with a large Chinstrap penguin rookery and the usually non-occupied Argentinean Camara station. From here we head to the open sea with direction Ushuaia.

Day 17 – 18: At sea en-route to Ushuaia – On our way north we are again followed by a great selection of seabirds while crossing the Drake Passage.