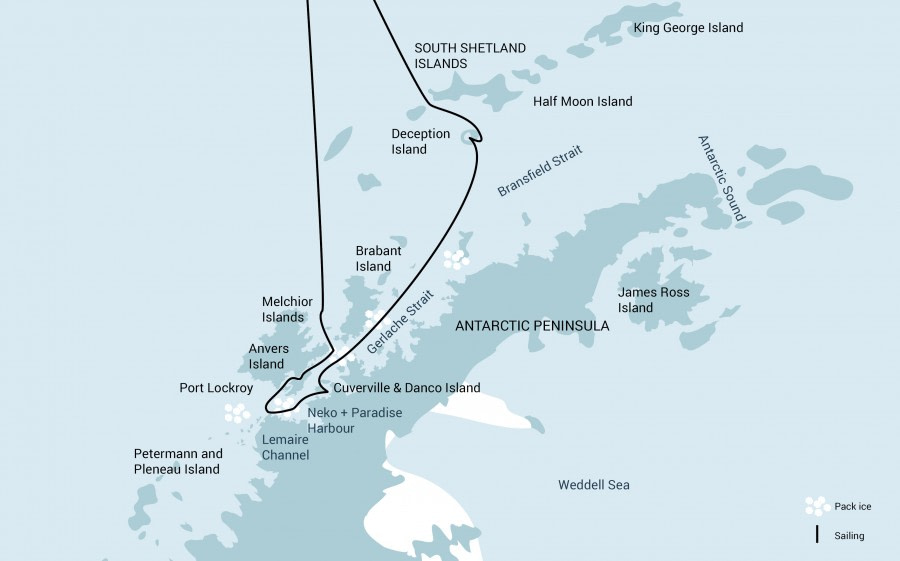 A cruise to the Falkland Islands, South Georgia & the Antarctic Peninsula. Visit some of the most beautiful arrays of wildlife on Earth. This journey will introduce you to at least 6 species of penguin and a whole lot of Antarctic fur seals!

In the afternoon of day 11 and depending on the conditions, we will start sailing southwards in the direction of the South Orkney Islands.

Depending on the conditions, you might visit Orcadas Base, an Argentine scientific station on Laurie Island in the South Orkney archipelago. The personnel here will happily show you their facility, where you can enjoy expansive views of the surrounding glaciers. If a visit isn’t possible, you may instead land at Signy Island’s Shingle Cove.

Day 14: Last push to the Antarctic

If the ice conditions permit, you now sail into the Weddell Sea. Here colossal tabular icebergs herald your arrival to the eastern side of the Antarctic Peninsula. Paulet Island, with its large population of Adélie penguins, is a possible stop. You might also visit Brown Bluff, located in the ice-clogged Antarctic Sound, where you could get the chance to set foot on the Antarctic Continent itself.

If conditions aren’t favorable to enter the Weddell Sea from the east, the ship will set course for Elephant Island and head into the Bransfield Strait, between the South Shetland Island’s and the Antarctic Peninsula.

This extended voyage gives you the chance to sail even farther down the icy coast of the western Antarctic Peninsula. There are several opportunities for great landings where you might set foot on the Antarctic Continent, surrounded by an epic landscape of alpine peaks and mammoth glaciers calving at sea level. Gentoo penguins, leopard seals, Weddell seals, humpback whales, and minke whales are often seen here.

PLEASE NOTE: All itineraries are for guidance only. Programs may vary depending on ice, weather, and wildlife conditions. Landings are subject to site availabilities, permissions, and environmental concerns per IAATO regulations. Official sailing plans and landing slots are scheduled with IAATO prior to the start of the season, but the expedition leader determines the final plan. Flexibility is paramount for expedition cruises. The average cruising speed for our vessel is 10.5 knots.