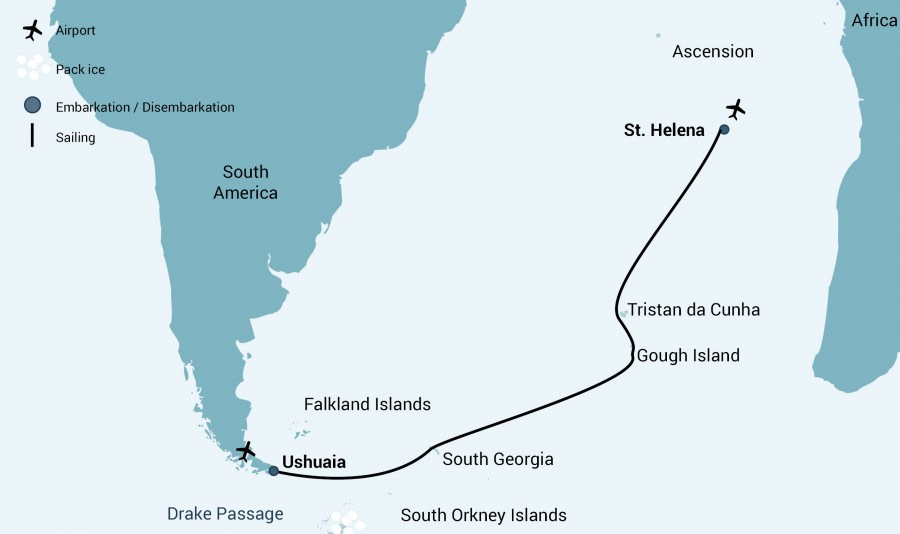 This Falkland Islands, South Georgia, and Antarctic Peninsula cruise is an animal-lover’s dream come true. The expedition explores one of the last untamed areas on Earth – a land of ruggedly beautiful landscapes and amazingly varied wildlife.

Day 2: The winged life of the westerlies

New Island, Coffin’s Harbour – This location is a reasonable walk from the landing site at the New Island South Wildlife Reserve, providing views of nesting black-browed albatrosses and rockhopper penguins. A more strenuous hike to Landsend Bluff may also show you some South American fur seals. The site of the only land-based whaling station on the Falkland Islands is south of the landing beach.

New Island North Nature Reserve – Landing here requires a special permit. If received, you can make a farewell visit to the black-browed albatrosses (among other bird species) and South American fur seals that make the Falklands their home.

Carcass Island – Despite its name, this island is pleasantly rodent-free and hence bounteous with birdlife. Anything from breeding Magellanic penguins and gentoos to numerous waders and passerine birds (including Cobb’s wrens and tussock-birds) live here.

The capital of the Falklands and center of its culture, Stanley has some Victorian-era charm: colorful houses, well-tended gardens, and English-style pubs are all to be found here. You can also see several century-old clipper ships nearby, silent witnesses to the hardships of 19th century sailors. The small but interesting museum is also worth a visit, covering the early days of settlement up to the Falklands War. Approximately 2,100 people live in Stanley. Admission to the museum is included.

Over the next several days, you have a chance to visit the following sites:

Salisbury Plain, St. Andrews Bay, Gold Harbour – These sites not only house the three largest king penguin colonies in South Georgia, they’re also three of the world’s largest breeding beaches for Antarctic fur seals. Literally millions breed on South Georgia during December and January. Only during the mid-season do they peak in their breeding cycle. Watch the large bulls keep a constant vigil (and occasionally fight) over territories where dozens of females have just given birth or are about to deliver.  Watch your step and stay cool when walking the beaches during this time.

Cobblers Cove, Godthul – At Cobblers Cove we aim for Rookery Point to see macaroni penguins. Light-mantled sooty albatrosses nest along the coastline and giant petrels can be observed as well. Godthul (Norwegian for “good cove”) was named by Norwegian whalers and seal-hunters and remains such as bones can still be found along the shore line. Beaches are the home of gentoo penguins.

In the afternoon of day 12 and depending on the conditions, we will start sailing southwards in the direction of the South Orkney Islands.

Depending on the conditions, you might visit Orcadas Base, an Argentine scientific station on Laurie Island in the South Orkney archipelago. The personnel here will happily show you their facility, where you can enjoy expansive views of the surrounding glaciers. If a visit isn’t possible, you may instead land in Coronation Island’s Shingle Cove.

Day 15: Last push to the Antarctic

If the ice conditions permit, you now sail into the Weddell Sea. Here colossal tabular icebergs herald your arrival to the eastern side of the Antarctic Peninsula. You might also visit Brown Bluff, located in the ice-clogged Antarctic Sound, where you could get the chance to set foot on the Antarctic Continent itself.

We sail further in the Antarctic Peninsula. Sites we may visits are:

Day 22: There and back again