Every Antarctic traveler experiences some of the adventure known to the historic polar explorers, but this voyage takes it to the next level. Touring both Antarctica and the sub-Antarctic, you’ll travel part of Shackleton’s legendary route, enjoying glacier-filled surroundings and exotic wildlife: numerous species of seal, whale, and seabird, penguins not the least.

Gray stone peaks sketched with snow, towers of broken blue-white ice, and dramatically different wildlife below and above. You first pass the snow-capped Melchior Islands and Schollaert Channel, sailing between Brabant and Anvers Islands.

Sites you may visit include:

Cuverville Island – Stabbing up between Rongé Island and the Antarctic Peninsula, Cuverville houses a massive colony of gentoo penguins as well as pairs of breeding brown skuas.

Paradise Bay – You may be able to take a Zodiac cruise in these sprawling, ice-flecked waters, where you have a good chance of seeing humpback and minke whales.

You may sail into the Weddell Sea via the Antarctic Sound. Here huge tabular icebergs herald your arrival to the eastern side of the Antarctic Peninsula.

You‘ve now completed roughly the same route (albeit in the opposite direction) as Sir Ernest Shackleton did using only a small life boat, the James Caird, in spring of 1916. Watching Elephant Island materialize on the horizon after crossing all that water, it’s hard not to marvel at how he and his five-man crew accomplished that feat.

The purpose of Shackleton’s crossing was to rescue 22 shipwrecked members of his Imperial Trans-Antarctic Expedition, also known as the Endurance Expedition, who were stranded on Elephant Island. For four and a half months, Shackleton undertook this legendary rescue.

Conditions on Elephant Island are severe. The coastline is mostly made up of vertical rock and ice cliffs highly exposed to the elements. If possible you will take the Zodiacs to Point Wild, where the marooned members of Shackleton’s expedition miraculously managed to survive.

Though you’re now at sea, en-route to the Falkland Islands, there’s rarely a lonesome moment here: Several species of bird follow the vessel southeast, such as albatrosses, storm petrels, shearwaters, and diving petrels.

The Falkland Islands offer an abundance of wildlife, easily approachable – with caution. These islands are largely unknown gems, primarily remembered for the war between the UK and Argentina in 1982. Not only do various species of bird live here, but chances are great you’ll see both Peale’s dolphins and Commerson’s dolphins in the surrounding waters.

During this part of the voyage, you may visit the following sites:
New Island, Coffin’s Harbour – This location is a reasonable walk from the landing site at the New Island South Wildlife Reserve, providing views of nesting black-browed albatrosses and rockhopper penguins. A more strenuous hike to Landsend Bluff may also show you some South American fur seals. The site of the only land-based whaling station on the Falkland Islands is south of the landing beach.

Carcass Island – Despite its name, this island is pleasantly rodent-free and hence bounteous with birdlife. Anything from breeding Magellanic and gentoo penguins to numerous waders and passerine birds (including Cobb’s wren and the tussock-bird) live here.

Saunders Island – Here you can see the black-browed albatross and its sometimes-clumsy landings, along with breeding imperial shags and rockhopper penguins. King penguins, Magellanic penguins, and gentoo penguins are also found here.

Your return voyage is far from lonely. While sailing to Puerto Madryn, you’re again greeted by the vast array of seabirds remembered from the passage south. But they seem a little more familiar to you now, and you to them.

Day 14: There and back again

Every adventure, no matter how grand, must eventually come to an end. It’s now time to disembark in Puerto Madryn, but with memories that will accompany you wherever your next adventure lies. 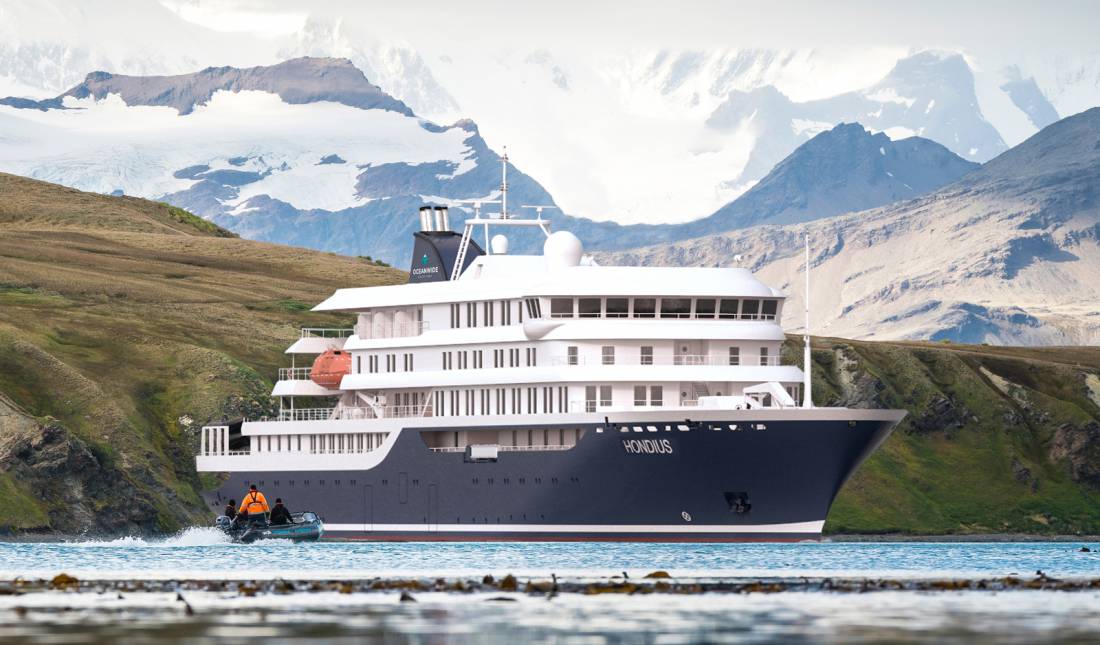 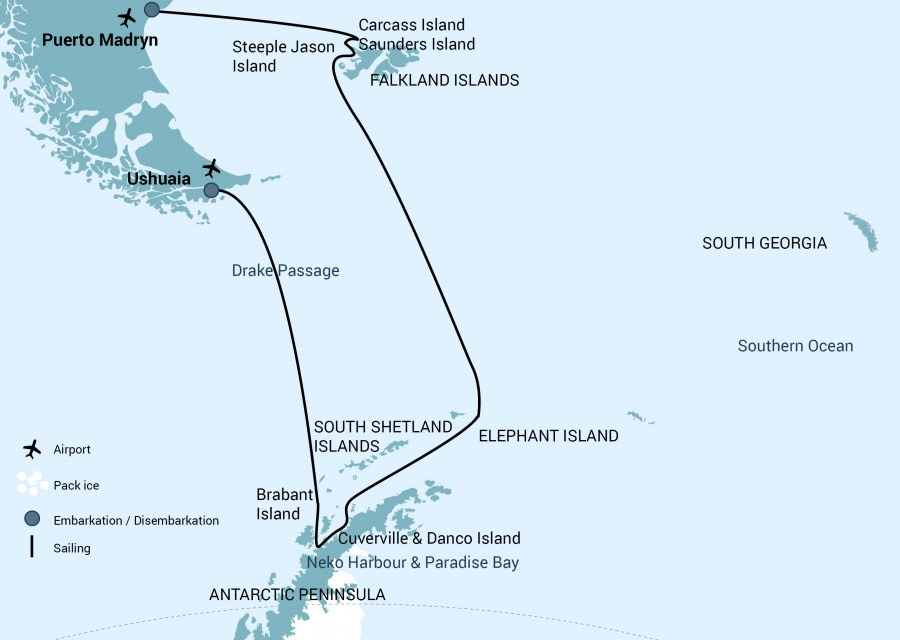